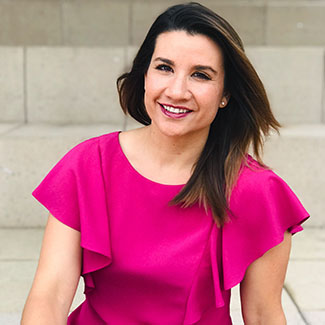 Daja Gegen is most passionate about two things: making connections and living up to her deep-rooted belief that to whom much is given, much is expected. The Austin Young Chamber gives her plenty of opportunities for both.

A native Las Vegan (they exist!), she grew up entrenched in the free-spirited ethos of the West, but for college, desired the idyllic academic setting of Boston and chose to attend Boston University. She earned a B.S. in Communication in 2008, majoring in Advertising and Sociology.

A handful of years later, she made her way to Austin, which she considers the best decision she’s ever made (and not just because it’s acceptable to eat tacos for multiple meals a day).

After joining the Chamber in January 2016, she quickly gravitated toward the Leadership Service Committee, and was an active committee member for a year before taking over as chair for 2017 and 2018.

Professionally, Daja made the move to MarTech in 2017 after cutting her teeth in marketing at advertising agencies and in ad sales. She currently works for Khoros, overseeing their North American Renewals team, and loves the fast-paced, ever-changing world of the tech industry.

Daja also serves on the Leadership Council of the Andy Roddick Foundation and is a former board member of the TownLake YMCA. When she’s not attending a meeting of some sort, Daja finds herself trying new Austin restaurants, dabbling in a multitude of hobbies and mastering none, and negotiating with her strong-willed husky, Minka.